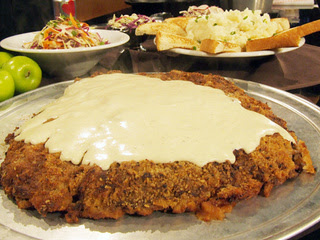 FORT WORTH, Texas - A Fort Worth restaurant is boasting the biggest, breaded beef in the world: a four-pound slab of top round, that, after being coated in crumbs, deep fried and red in cream gravy, weighs about ten pounds and packs a whopping 10,000 calories.

The Cowtown Diner started serving the "Full O Bull" platter when it opened in January. Since then, the restaurant has dished up about 15 orders of the bovine complete with sides: six pounds of mashed potatoes and ten slices of Texas toast.
How many fat grams are packed in such a preposterous meal?

"We were afraid to calculate that," said Scott Jones, owner of the Cowtown Diner. "We also didn't want to figure out the Weight Watchers points."

If you're brave enough to tackle the $70 mammoth meal by yourself, you'll get it for free. You don't even have to eat it in a certain time limit. You just have to eat it all: steak, potatoes, gravy and toast.

So far, Jones said, no one has swallowed the challenge.
Posted by Suzy