I found this old clipping from the local newspaper...the year in the top margin is 1944. I was reading the the radio listings for that day and and saw some titles that I remembered from my childhood....Dick Tracy, Perry mason, and then something caught my eye... 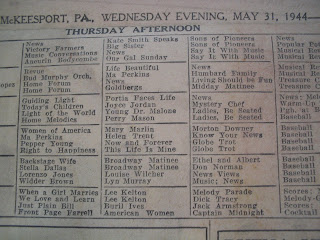 look in the third box in the left-hand column, first entry.....

Now, I've not been one to follow the soaps in recent years, but I remember my grandmother having lunch at 12:00 sharp so that she could listen to "her stories". Each one was 15 minutes long, "The Guiding Light" and "Search for Tomorrow". They were referred to as soaps because the were sponsored by Joy dish washing liquid and Spic and Span.

Here's some info about the series:
Guiding Light (known as The Guiding Light prior to 1975, ) is an Emmy award winning American television program credited by the Guinness Book of World Records as being the longest-running soap opera in production and the longest running drama in television history.

The 15,000th televised episode of Guiding Light aired on September 7, 2006. Due to this series run, it is not only considered to be the longest soap opera, but the longest series of any show created.
The program was created by soap writer Irna Phillips, and began as an NBC radio serial on January 25, 1937 before moving to CBS on June 30, 1952, as a televised serial. This program has survived for over 70 years!

Email ThisBlogThis!Share to TwitterShare to FacebookShare to Pinterest
Labels: Show and tell