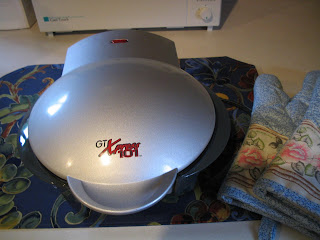 First let me say that I 'm in no way connected to the company that makes this, but I just had to tell you about one of the best purchases I ever made! It's a little kitchen appliance called the "GT XPress 101 ".
I first saw this on an infomercial for $30.00 plus shipping. I was impressed with what I was seeing, but I asked myself "Does this thing really work???" Well soon after that we started selling them at Target, and again it caught my eye, but we were always sold out before I could get one. About a year later, I was in Linens and Things and I saw one on their reduced counter for $13.00! It was reduced because it was the display model ( never used) and didn't have the box...who cares about the box??...so I bought it.
There are so many things you can make with this gadget, from meats to desserts, but most of all, I like to use it to make my lunch with leftovers. It literally only takes a few tablespoons of this and that, wrapped in a flour tortilla and seal it with some cheese to make a wrap. You know, those leftovers that are not enough for a full serving but are just too tasty to throw away. It doesn't heat up the kitchen and it's portable. This is truly one of those small kitchen appliances that has earned valuable counter space!!! 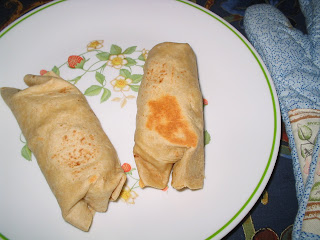 For more great "Show and Tell" click over to Kelli's blog.
Posted by Suzy