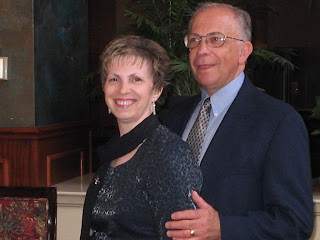 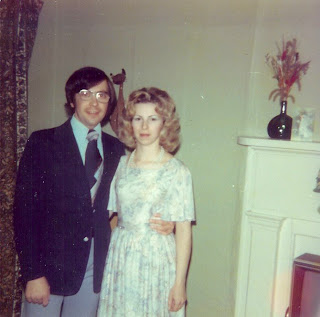 Last Wednesday, March 14th, Jack and I celebrated our 31st Wedding Anniversary... Where has the time gone?

It was 1974. After much persistence, a mutual friend set us up on a blind date. The evening went fine but neither one of us heard any bells or whistles, so we went our separate ways never expecting to hear from each other again. A few months later this friend's mom asked me to send that nice guy a Christmas card....I said " no ".
But finally I gave in and sent it, but to the wrong zipcode...somehow.. he got the card. Being polite, he sent me a card in return. Fine .. now that's taken care of, and on with my life, right? February came... and the friend's Mom tells me that that nice guy is coming to Pittsburgh for some work related classes, and why don't I ask him to dinner?....I said " no ".

But after some persuading, I agreed. And the rest is history!

Jack asked me to marry him just a few months later, but it was almost a year and a half before we finally tied the knot! We both had been married before, and Jack would not only be getting a wife, but a family. I had two little boys from my first marriage. Two years passed, and in 1978, our daughter Sarah was born. Yes, we've had some rocky times, but we both agree that it's the best decision we ever made!
Posted by Suzy