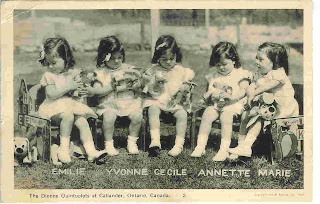 On May 28, 1934, Oliva and Elzire Dionne of Corbeil, Ontario became the parents of five tiny baby girls: Annette, Emilie, Yvonne, Cecile and Marie. Dr. Allan Roy Dafoe helped deliver the premature babies, who together weighed about 13.6 pounds. The identical quintuplets were the first quintuplets in the world to survive more than a few days. News of the miracle babies soon spread to newspapers around the globe.

Oliva Dionne was a poor French-Canadian farmer. His wife Elzire was twenty-five when the quintuplets were born--and already the mother of six other children. They were put by an open stove to keep warm, and mothers from surrounding villages brought breast milk for them. Against all expectations, they survived their first weeks.

The girls grew up in a compound, away from their family. For nine years the quintuplets lived in a sort of theme park know as "Quintland", to which about three million tourists came to observe them through a one-way screen. The little girls became a major visitor attraction for the province of Ontario, bringing in an estimated $250 million dollars per year in today's dollars.

Above is a postcard, dated 1939, that my aunt sent to my grandmother from "Quintland ".
For more "Show and Tell " click here.