Will the winter be wooly?

When I was a little girl, I often heard my grandparents talk about the wooly caterpillar and the prediction of winter. This fall, I've seen several in my flower bed and they were all marked this same way: 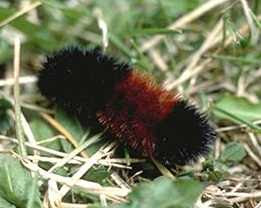 Email ThisBlogThis!Share to TwitterShare to FacebookShare to Pinterest
Labels: Odds and Ends, weather