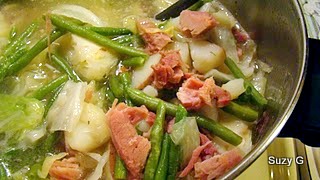 We had a very large ham this Christmas and there was plenty leftover. I froze the ham bone and extra ham to make a favorite dish of ours. My family has made this for a long as I can remember...

Ham, Potatoes, and Cabbage
Put the ham bone into a large soup pot. Fill the pot about half full with water. Heat the water to a rolling boil so that any ham left on the bone will cook-off. Add half of a medium onion...  chopped.
Boil for 45 minutes to an hour. Remove the bone and pull off any remaining ham with a fork. Discard the bone and put the remaining ham back into the pot.
Add about 6 large quartered potatoes. I used red ones because that's what I had on hand. Cook until potatoes are tender... then add half a head of cabbage... chopped in large pieces... and a bag of frozen green beans.
Hubby likes a thicker broth so I sprinkle in some instant mashed potatoes. (great as a thickener for soups and stews).

Make sure you make enough for leftovers because it's always better the second day after the flavors mingle!... Enjoy!

Email ThisBlogThis!Share to TwitterShare to FacebookShare to Pinterest
Labels: food and recipes