The man who is synonymous with the official flag of Steelers Nation was given a send off by its citizens yesterday in a ceremony that could only be characterized as Terrible. A Terrible Towel twirling tribute seemed a fitting farewell for Myron Cope, the famed Steelers broadcaster and sports journalist who died Wednesday. 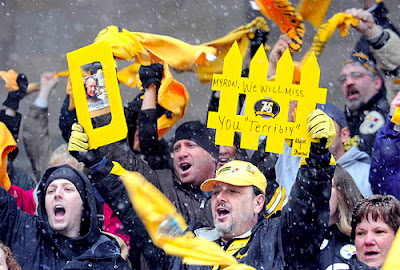 Around 350 fans with nearly as many Terrible Towels braved heavy snowfall to remember famed broadcaster and native Pittsburgher Myron Cope in front of the City-County Building at noon Friday. 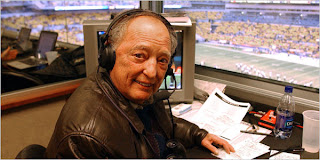 His creation of the Terrible Towel has developed into a worldwide symbol of Steelers football.'' The idea was launched at WTAE in 1975.“They told me to come up with a gimmick,” he once remembered. “I told them, ‘I’m not a gimmick guy.’ They said, ‘Your contract expires in March.’
“ ‘I’m a gimmick guy,’ I told them.”
In 1996, Mr. Cope donated the trademark for the towels and associated items like gloves and pillows to the Allegheny Valley School for the disabled of Corapolis, Pa., where his son, Daniel, born with brain damage, is a resident. The school has received more than $2.2 million from sales.
Myron Cope embodied the spirit of our city and team, and he'll never be forgotten. We'll think of him whenever his Terrible Towel is waved, and we'll miss his unmistakable, joyful voice whenever the Steelers score. He was a true original."
Posted by Suzy